In 2015, I launched a new Twitter Search & Analytics tool socialbearing.com. It hooks up to many of the feeds available through Twitter’s API  such as user and home timelines, public and people search and mentions, follower and friend streams. 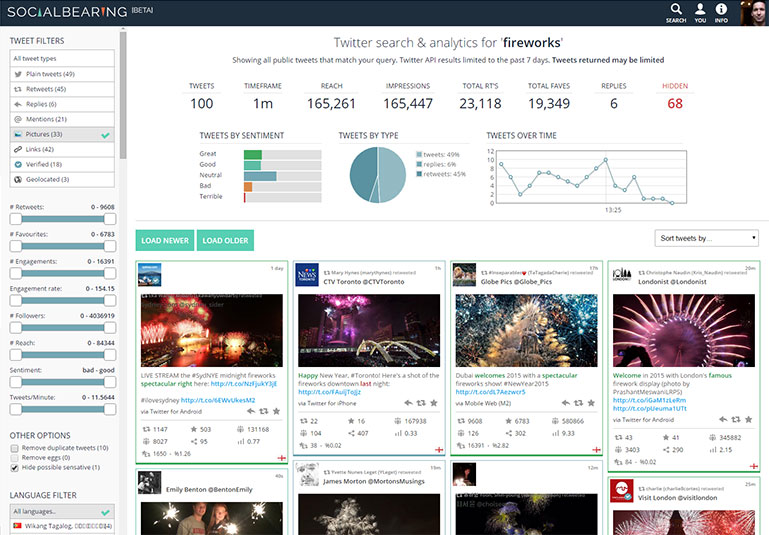 I have previously written a number of blog posts about the Twitter API including authentication and creating a custom Twitter feed for user timelines. Social Bearing has built upon a number of features that these articles have covered.

This post is intended to give a brief overview into some of the technical aspects in creating a more complex Twitter tool like Social Bearing and some of the decisions I was faced with.

In mid-2013, Twitter required all access to streams or ‘endpoints’ to be authenticated so one of the first things you’ll want to look at with any Twitter website or App is the authentication method.

User authentication requires visitors to your website or application to first sign in to Twitter before being redirected back to the site. Rate limits are applied on a user by user basis which is usually better for high traffic sites that may need to allow for hundreds of users and potentially thousands of requests to Twitter every few minutes. I used this excellent tutsplus tutorial to implement user sign-in without the account creation.

App based authentication on the other hand means anyone visiting your site will use the same tokens. This is usually better for lower traffic sites or individual applications that are unlikely to exceed these rate limits.

Anyone who sets about creating a twitter tool will be familiar with Twitter’s public API. There is so much data available here and worth checking out all the read only streams available (GET) and write based actions (POST).

When you know which stream(s) you are likely to use, you need to make an authenticated server-side request using PHP, passing the tokens and keys you have got either from the App or User. This can be quite complicated unless you use an oAuth library. I use twitteroauth by @abraham for PHP.

An example of a server side request in PHP to the GET users/show endpoint would be:

If this file were named get-user.php, you can pass the ‘user’ parameter in the URL. e.g. get-user.php?user=tomwebdev. You could do a load of stuff direct in PHP server-side to the $tweets data object if you wish, however I prefer to do most of the data manipulation and formatting within JavaScript which is why the resulting $tweets data above is echoed out in JSON format.

This will output the following JSON data when viewed in Chrome Inspector. 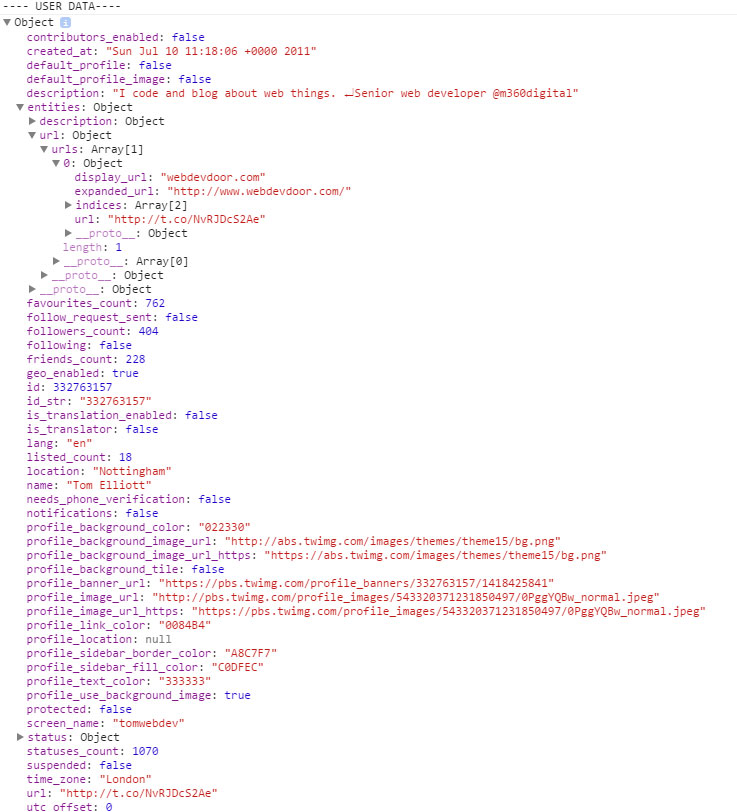 I spent a lot of time exploring this data when working on Social Bearing and found pieces of information contained in tweet and user entities that are not commonly used.

Some interesting facts I learnt about Twitter data include:

Checkout www.socialbearing.com to see how some of this Twitter data can be used